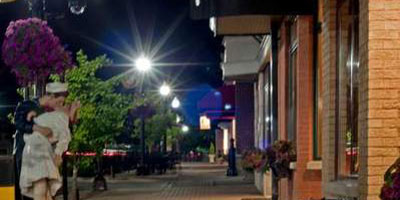 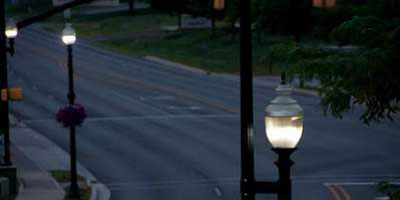 The city of Carmel Indiana currently maintains approximately 1300 street lights of which approximately 800 were retrofitted with Light-Emitting Diode (LED) retrofit kits. This conversion in the decorative post-top luminaires has saved the city an estimated 48% in energy costs (based on a test area) with its additional environmental greenhouse emission reduction. Additional saving in maintenance will also be realized with the long life of the LED retrofit kits.

This project was made possible thru The Energy Efficiency and Conservation Block Grant (EECBG) program of the Dept of Energy.

As is typical in many downtown city decorative street lighting projects, portions of the lighting system had been installed and directly connected to the local electric utility co. This lighting is often called 'non-metered load' and is billed to the city on a per unit basis. Duke Energy has the LED specs and is assisting in an energy audit. Once completed, a new agreement and tariff for energy usage for all the non-metered LED lights will be established.

Initial investigations included studying new fixtures and retrofitting the existing fixtures. After a study of products available, including test installations, it was determined that retrofitting the existing decorative post top fixtures would give the city the fastest payback. A 90Watt retrofit Kit was selected to replace both existing metal halide and HPS sources. The selected conversion kit from Beacon Products was selected based on its robust design and construction, and its ease of installation in existing fixtures. The distribution of light generated equivalent light levels with a reduction in glare.

"The City of Carmel has gained many benefits from this conversion", stated David Huffman, Director or Public Works, "including reduced stock requirements (8 SKUs have been eliminated), and reduced maintenance requirements." The lighting conversion provided uniform, glare-free illumination on the roadway, as-well-as the sidewalks. Visibility of pedestrian and motorists has increased.