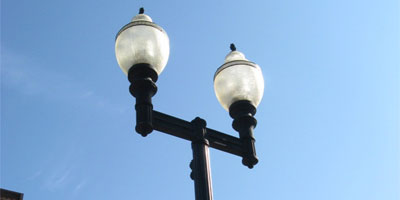 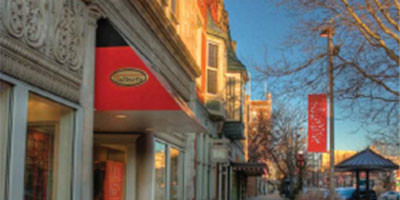 Making use of the existing fixture and retrofitting with LED lighting often proves to be an economical solution in reducing energy and maintenance costs. Starting with an evaluation of the existing luminaires, including assessing the light transmission qualities of the globes/acorns, we can determine the economic viability of this approach. Several styles of retrofit kits are available. In the case of Holland's requirements, it was determined that a 'direct' without increasing the glare created with this lantern style luminaire while the daytime appearance is maintained.

The City of Holland, MI had more than 330 existing, decorative post-top luminaries with a 175W MH source. The total wattage for each pole was in excess of 205 watts. These luminaires were more than 10 years in service and were starting to require a substantial amount of operations budget labor time and money to maintain.

One of the major hurdles to overcome for the City of Holland to enjoy the fullest benefits of LED energy and maintenance lighting was to overcome existing rate structures.

The existing luminaires were connected directly to the Holland Bureau of Public Works lines and the electricity and maintenance were billed to the city as 'non-metered' load. One of the first obstacles to overcome was the fact that no LED lighting rate existed. The Holland Board of Public Works again demonstrated its willingness for a partnership with the city and created a special rate for the energy consumed, and the more than 50,000hr life of the LED Retrofit KITS. They continued this partnership by providing the labor to make the change outs and install the retrofit kits. The city was able to reduce energy by 67%, and virtually eliminate maintenance costs.

Mark Vanderploeg, City Planner for Holland, said "The new installation is providing comparable levels of light, with reduced 'brightness' and a substantially reduced amount of up-light, and these new kits are much more 'dark sky' friendly."

This installation was completed thru the efforts of Robert Shaver Co who has been a lighting agency for more than the past 40 years serving the western Michigan area.