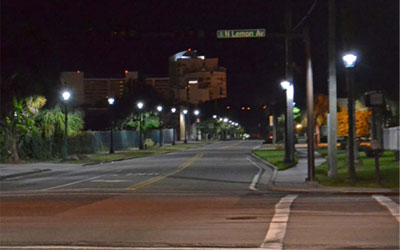 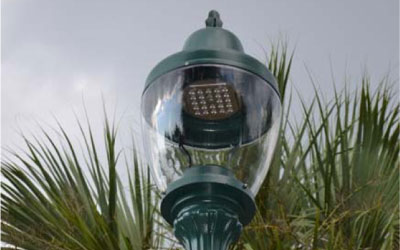 Phase 1, Sarasota committed to updating the city’s public lighting. The first phase of the downtown streetscape program, initiated by Kelly Kirschner, former mayor of Sarasota, marks a significant step toward the overall goal of reducing the city’s greenhouse emissions, noted Alison Albee in the Public Works department. The end result, Albee continued, will record a net savings of about 250+ tons of carbon dioxide emissions a year, equivalent to removing more than 40 cars from the roads, and promising a greener environment for the city, its residents, and visitors.

Considerations by city officials include daytime appearance as well as nighttime lighting and energy performance in addition to the overall economics. By replacing older metal halide fixtures that consume 210 Watts with new 30-Watt LED lighting fixtures, the new Acorn lighting fixtures from Beacon Products will produce more light with less energy, saving the city more than 85% on its lighting electricity bill within the area where the luminaires are being converted. In addition, the LED fixtures will last an average of seven times longer than the existing metal halide units and annual maintenance costs will be dramatically reduced. Albee stated “The opportunity exists for further energy-saving and environmental benefits as more lights are replaced within the City.”

In the first phase of this project, 117 new lighting fixtures are installed on MLK Way, 67 units installed on the Boulevard of Arts, and 61 new luminaries installed on Central Avenue.

The Village II Series provides exceptional quality illumination, stability, durability and cost savings. The Village II Acorn style, post-top luminaire uses up to 85% less electricity than its incandescent, high-pressure sodium, quartz or metal halide counterparts. And unlike conventional lighting, there is negligible light loss over the life of the light source. It provides reliable, durable, maintenance-free illumination for more than 60,500 hours* which is equivalent to more than 13 years in service. (*60,500 hours reported life, 290,000 projected life, based on LM80 and TM21 guidelines)